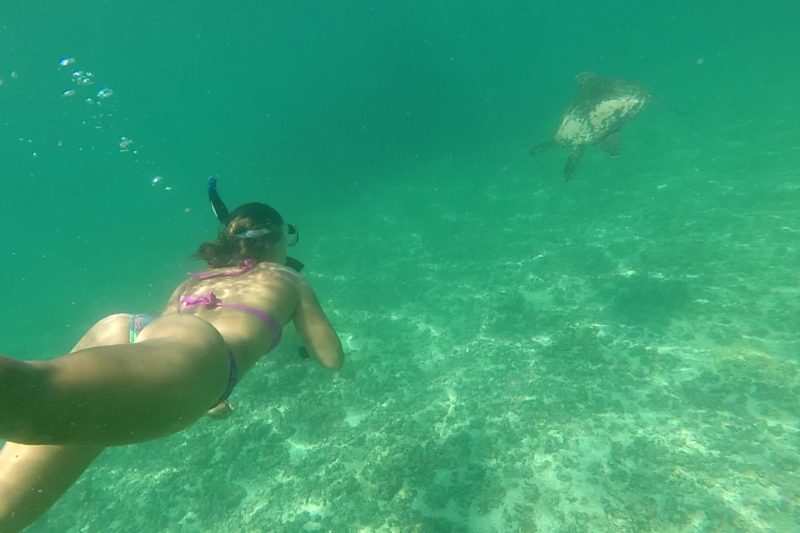 When you imagine traveling to Ecuador, most people imagine themselves snorkeling and diving in the Galapagos Islands. It’s easy to understand why the Galapagos is a dream vacation for so many, but the Galapagos comes with a hefty price tag: $$$.

Fortunately, for those wanting to fulfill their dreams of visiting the Galapagos Islands, but can not afford it, there is a much cheaper alternative that has nearly the same exact wildlife called Isla de La Plata. For $20-50 you can see 3 species of booby (blue-footed booby, red-footed booby, and the Nazca booby), sea turtles, dolphins, humpback whales, frigate birds, waved albatrosses, red-billed tropic birds, various species of fish, sea lions, and, if you are lucky, the giant manta ray that can be as large as a small school bus – all in a one day tour to the Isla! And that is why they call it “The Poor Man’s Galapagos”.

Isla de La Plata is a small island 40 kilometers off the coast of Manabi, Ecuador. Visiting the island must be done with a tour as it is a part of Parque Nacional Machalilla, which is a national park that consists of various islands, beaches, and hiking trails.

Isla de La Plata tours leave out of Puerto Lopez every morning and it is about a 1.5 hour boat ride to arrive to the island. During the boat trip, most tour groups encounter numerous pods of dolphins, including ones with spots, as well as pods of humpback whales during the mating season.

Upon arrival to the island, you have around 5 different hiking trail options depending on what species of bird your group is interested in seeing. However, on just about all of the trials you will see the blue-footed booby that made Galapagos so famous. Additionally, all of the trails have gorgeous, panoramic views of the Pacific Ocean and beaches.

After exploring the island by foot, you get to explore it snorkeling! Much like the Galapagos, Isla de La Plata has great visibility and concentrated biodiversity, meaning you can see a large variety of sea life (i.e. fish, manta rays, sea turtles, octopus, etc.) simply snorkeling.

The best time to visit Isla de La Plata, in terms of weather, would be between December and March. However, June through September is when the humpback whales are mating along the Ecuadorian coast. Basically, that means just about every day between those months you can see humpback whales. While you can easily see the whales from the rooftop balconies of La Casa long-term hostel, we all know that seeing them up-close and personal is jaw-dropping amazing!

So when should you go?

Send us a message

Use our secure online form
to book a stay at La Casa.

How to get to La Casa

The nearest international airport is in Guayaquil. From there, you can take a taxi or a bus to Ayampe.

Take a bus either to Olon or Montanita. It is the CLP bus company (large brown/maroon buses) direct from the Guayaquil Bus Terminal.

Take a green Manglaralto bus heading north. Ask the bus to stop at Ayampe. Ayampe is approximately 25 minutes away. Taxis from Montanita or Olon are around $15.

Take a green Manglaralto bus heading south. Ask the bus to stop at Ayampe. Ayampe is approximately 15 minutes away. Taxis from Puerto Lopez are $5.

The bus will let you off on the E15 by a small store. It is a five minute walk to La Casa from here. Walk straight towards the ocean. At the end of the road, La Casa is the large white three-story building directly on the corner.